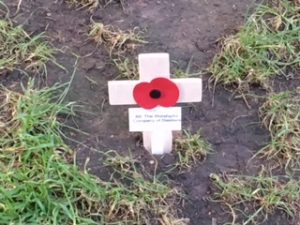 One of the pleasures of being Master (and there are many) is being part of some national events as a participant rather than an observer. It’s Remembrance week in November and we are in the churchyard of St Paul’s Cathedral at the very hour and day of the second battle of Paschendale exactly one hundred years ago lining up to plant a Distillers cross in the grass of their Remembrance Garden after the service and arrival of the Lord Mayor and Corporation as well as the leaders of the military and emergency services. It would take a hard heart not to be moved by such an occasion.

The Lord Mayor’s year is close to its end and the celebrations are nearing their final point; the service of thanksgiving takes place at St Stephens Walbrook, the Wren church next 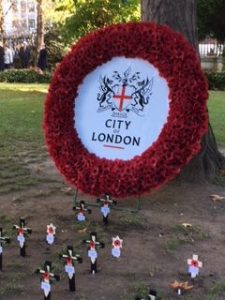 to the Mansion House, a building that has been described as a perfect piece of architecture – and the one where Wren tried out all his ideas before tackling St Paul’s. The Grand Finale will be with the London Symphony Orchestra in a day or so, but tonight it is Zadok the Priest by the church choir that completes a wonderful service, It has been a remarkable year by a very special Lord Mayor who has brought his infectious energy and good humour to the office and charmed the Livery world and the many contacts of the City of London in tireless work across the whole country and the twenty others that he has visited. A hard act to follow indeed.

In a world of fascinating tradition and rituals, the Silent Ceremony must rank as one of the most curious. It’s November, I am in Guildhall and the day has arrived when the Lord Mayor steps down and the new one, Alderman Charles Bowman is installed. The transition Ceremony takes place as the symbols of office – the mace, the sword, the sceptre and the seal are presented to the outgoing mayor who touches then with his gloved hand, and the incoming Mayor who touches with bare hand symbolising the hand-over. The bearer approach the chair with reverence – bowing every third step forwards and in reverse. The New Mayor puts on his new hat, the outgoing one takes his off, the procession forms and then the pipers proclaim the arrival of the new Lord Mayor to the outside world. Until then the whole ceremony has taken place in complete silence. Quite moving and very City of London.