A tradition within all livery companies

It was customary for our forefathers in drinking parties to pass round a large cup, from which each drank in turn to some of the company 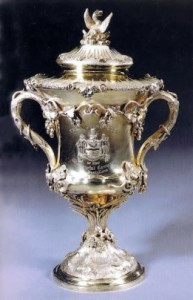 The Ceremony of the Loving Cup, which is traditional in all Livery Companies, is said to date back to Saxon times (before the Norman Conquest of 1066), and to derive from the assassination of King Edward the martyr whilst drinking, by command of Elfrida, his wife.

It was customary for our forefathers in drinking parties to pass round a large cup, from which each drank in turn to some of the company. He who thus drunk stood up and, as he lifted the cup with both hands, his body was exposed without defence to a blow. An enemy with the intention of murdering him often seized upon the occasion. Consequently, when one of the company stood up to drink, he required the companion who sat next to him to be his pledge. If the pledge consented, he stood up and raised his drawn sword in his hand to defend the drinker whilst consuming the drink.

Nowadays the cup passes round the table with each guest drinking to his neighbour. When the guest about to drink a Loving Cup stands up, those on either side of him also rise. The guest on one side stands with his back to the one who is about to drink, so as to protect him from attack. The drinker and the guest on his other side bow to each other, the second guest removes the lid, the drinker drinks, and wipes the rim of the cup with a napkin provided, and the second guest replaces the lid and the two bow to each other again. The same procedure is then followed by the second guest with his next neighbour, the original drinker now mounting guard, and the one who was protecting him sits down again.

It is believed that the Distillers’ Company is the only Livery Company to circulate daggers (as a symbol of the drawn sword referred to above) with the Loving Cup. 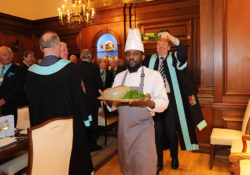 On a typical February day, the luncheon was held in the beautiful Girdlers’ Hall, following a Court meeting that morning. The attendees to the luncheon were greeted by Pipe Sgt. Andrew... 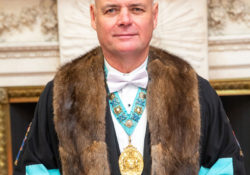 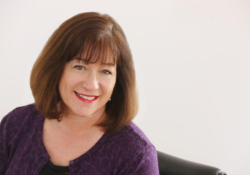